Google’s new venture has become a revolution that aims to impart the power of the Internet to every nook and corner of the world. Project loon as it is named, is a real boon to people in suburbs to enjoy the web world facts and funs! It is wonder to watch a network of balloons floating up in the sky to connect everyone with the amazing world of web! If you are living in any remote or rural areas, Google hereby solves your web connectivity issues!

Project loon was tested to know its results at US, Brazil and New Zealand. At 2013, it was eventually launched to transmit internet facilities to everyone high up from earth. The balloon has electronic equipments to transfer internet services to people. This are charged using solar panels and wind by Google. Balloons form a network of themselves and thereby signals are transmitted to the earth. Isn’t that an amazing scenario?

In the current era of World Wide Web, it is a bitter fact to know that internet covers only one third of the whole world population. Still over 60% of the entire population is yet to enjoy internet facilities. Google’s Project loon is true solution to this! 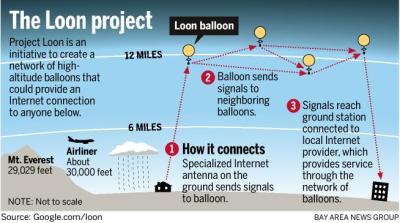 Shall we look at some interesting facts about Google’s Balloon powered internet?

This innovative and interesting invention of Google is a real path changer to the rural population, imparting them with much more educational and employment facilities. Project Loon awakens the rural World to new spectrum of knowledge and skills through the world of internet!

Big Data-As-A-Service: What, Why and How